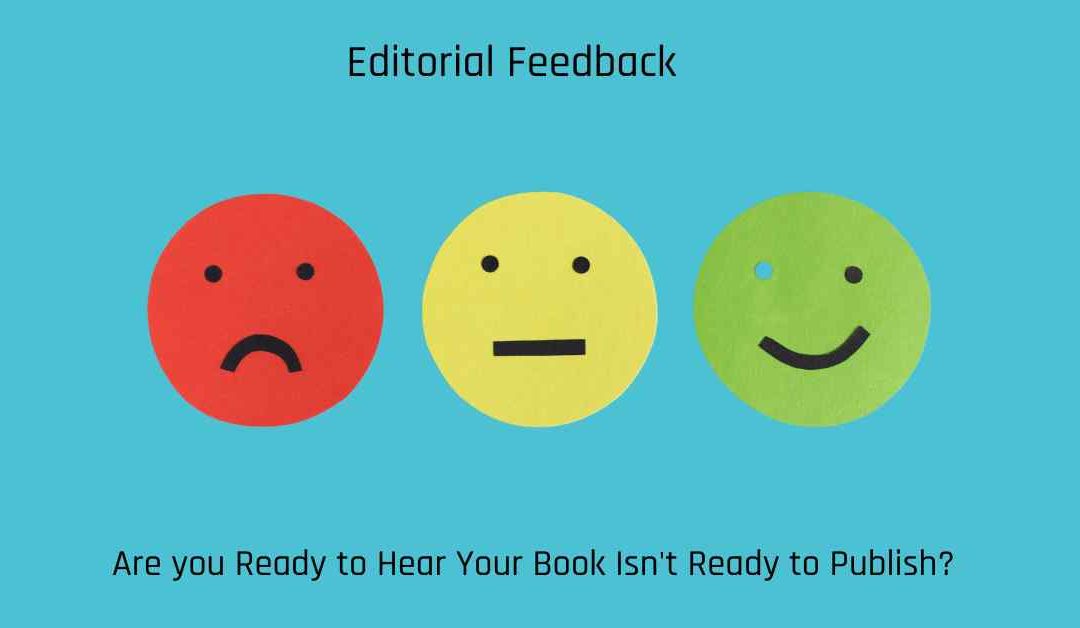 Or, Are You Ready to Hear Your Book Isn’t Ready to Publish?

You’ve got a lengthy letter from your editor (or agent), full of editorial feedback and advice, and talking about revisions which sound pretty extensive and your heart sinks into your boots because you hoped you were nearly there …

Of course it’s disappointing. You may even feel angry or misunderstood. But don’t allow it to fill you with despair and make you give up. The advice you’ve been given will have been provided with the intention of helping the book to reach its full potential, so try to focus on that and not spiral into an offended fury.

I was already working on this post when I attended Byte the Book’s event How to Deal with Editorial Advice and Understanding Genre with Andy Lowe and Lisa Eveleigh, and the two speakers said a couple of interesting things: Andy Lowe, an editor and author, mentioned that he often finds that editorial work is a bit like therapy (and that resonated as I often feel that way too). For a lot of authors, there can be psychological barriers to getting their work out there because of the certainty of criticism, and rejection, and the difficulty of dealing with that editorial feedback without despairing or becoming defensive. When this is so, the support an editor gives is one of the real benefits of working with them before submitting work to agents or publishers.

Lisa Eveleigh, a literary agent, agreed that that kind of emotional support was part of her job and quoted the late Hilary Rubenstein, Chairman of A.P. Watt, who said that ‘agents have to have the negotiating skills of a man and the nurturing skills of a mother’.

So editors and agents get it, we really do, but we wouldn’t be doing our jobs if we didn’t do everything we could to help the book reach its potential, and that means telling you when it isn’t ready, and what needs to happen to make it ready.

Here, then, is some advice for how to handle editorial feedback from an editor, agent or publisher.

Don’t immediately start making big changes or composing an email about how the editor is completely wrong. The first is reactive, and instead, you need to be in control of your work. The second is defensive, a refusal to engage with the process of revising the manuscript.

You need time to process editorial feedback and get to grips with how you’re going to implement it, just as the editor needed time with the manuscript to figure out how it could be improved. So, read the editorial letter or assessment once, and then put it away for a few days. It’s ok to feel your way through at this stage. There’s no rush.

Getting a book ready to publish is a slow process, but lots of writers are in a tearing hurry, desperate for the day when they’ll be a published author. They sabotage themselves by hurrying a draft that isn’t ready, or sending it off to agents before they’ve finished working on it, or self-publishing because of impatience rather than because the book is ready for market. Then they wonder why there’s a lack of interest in their work. It’s because it isn’t fully formed yet. It isn’t ready.

A series of false starts and dead ends gets you nowhere fast. The fastest way to get there is to slow down.

Rein in your ego

Arrogance is a killer, and if too much ego is one of your faults, you need to recognise it and work on managing it.

A professional writer needs plenty of confidence in themselves, of course, but many let it get out of hand.

All editors encounter the type of writer who has a very high opinion of their own work, while being generally condescending about the books currently being published. But they aren’t ‘in the arena’, as Brené Brown (via Teddy Roosevelt) puts it, so their opinion of those books isn’t worth much.

An arrogant author thinks readers these days are stupid, so they don’t need to work hard on their writing. But readers are smart: they know when an author isn’t even trying.

Arrogant authors think classic books wouldn’t be published today because they would be too clever for today’s audience. But novels have evolved over the last 200 years, and what worked in the past often doesn’t work now. Precisely because those earlier novels exist, imitations of them will not feel fresh but old-fashioned.

If you’re honest enough to admit this sounds like you, pull yourself up: rein in your ego. Don’t become the kind of author who makes their entire personality ‘unrecognised, bitter, self-anointed genius’ and bores their friends to death.

Around December each year, editors can find they are much in demand with beginner writers who knocked out a first draft during NaNoWriMo, and are often expecting to polish that draft up with an editor and get it published. They are dreaming.

NaNoWriMo is about getting 50,000 words on the page, because you can’t get better at writing until you do some, you can’t form a writing habit without writing regularly, and you can’t edit and revise your way to a better draft without doing a first draft. And the first draft is quite likely to be more or less crap, because that’s the nature of first drafts. And that’s fine.

Start being more realistic. Chefs don’t begin by opening their own restaurant. Professional musicians don’t bang out ‘The Entertainer’ at their first piano lesson. Olympic athletes don’t take up running a few months before the games. So why would you think writing a publishable book is so easy you could do it on your first try?

Annoying but true: if you have a big emotional response to editorial feedback, there’s almost certainly something in it.

You may well have a darling or two that needs killing and you’re angry because you’re resisting accepting the inevitable – again, that’s your ego talking.

Think about it: if you get a brilliant suggestion that is a pure addition and threatens nothing you’ve already done, you will feel excited about the direction it takes you in. Equally, if the suggestion is useless to you, then it’s easy to dismiss it, but you likely wouldn’t feel much about it. If it gets a reaction from you, that’s interesting!

You must separate yourself from your work: criticism of the work is not criticism of you as a person. Try to step back and examine why you are angry. Why are you so attached to the thing the editor wants you to change? Is it because you thought you were showing one thing and the editor saw something else? Is it because your writing is drawn from your real life, and you are now seeing the events differently, from a reader’s perspective? This is one of the perils of writing about oneself, especially if you aren’t as self-aware as you could be, or don’t have enough emotional distance from an event to see it clearly, the way an outsider would.

If you really have been misunderstood, then the next draft needs to make your meaning clearer. But don’t assume the reader is wrong. When they see things you didn’t think were there, they’re usually right.

In the end, you have the final say. It’s your book, and unless you’re under contract with a publisher and the changes are required for the manuscript to be accepted, you’ll need to trust your own judgement. That means don’t blindly believe everything you hear about your book (good or bad).

Remember, you don’t have to take every suggestion. They may not all be gold, after all, and if you take some, others may become unnecessary. Have a good reason for taking or leaving the editorial advice. And be honest with yourself about what you’re doing – don’t reject a change because it will require a lot of work.

Sadly, you can’t just ignore editorial feedback from publishing professionals and skip merrily on as though it never happened. Well, you technically can – you’re an adult, and it’s still your book – but if you just toss your head and say ‘the editor is wrong, and I’ll show them, and I’ll do it my way like Frank bloody Sinatra’ and then flounce off to self-publish with your manuscript as is, you may be in for a shock, because if you weren’t ready to hear an editor explain as gently as possible that you’re a long way from done, you are absolutely NOT ready for 1-star reader reviews.

Andy Lowe echoed this in the Byte the Book webinar – authors need to accept and understand criticism, and work on their craft. Publishing independently because an editor has said your book or writing is not ready yet is the wrong reason for doing it. Lisa Eveleigh added that editors and agents can always tell when a submission is from someone who wants to be published but doesn’t read much and isn’t prepared to work on their writing, and those submissions are the furthest from getting traditionally published.

If you’re ready to get some editorial feedback on your book and put in the work to make it ready to publish, a manuscript assessment might be your best next step to getting there.