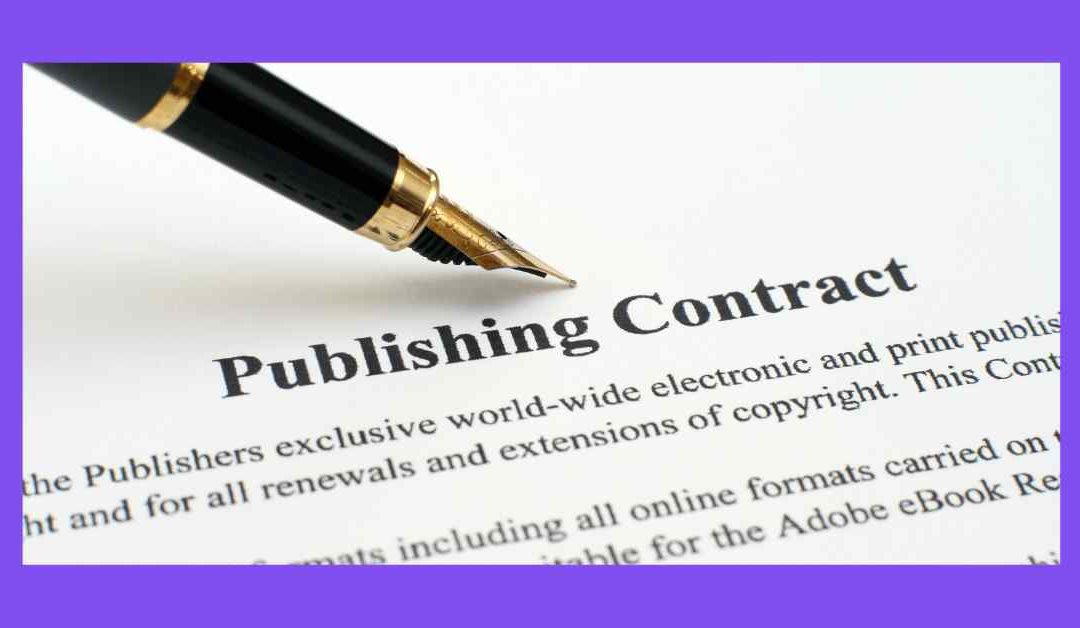 You made it! You got a book deal and now here are the terms – the publishing contract. The publisher is asking you to read it, sign it and send it back. Some of it is a bit confusing, but … I mean, they know what they’re doing, so it’ll be fine to just sign it, right?

Wrong! Please read on because it’s absolutely crucial you don’t drop the ball now, not after all your hard work.

The contract the publisher sends over will be written to suit them. There may be several key areas where the terms could be improved, and those terms need to be negotiated.

Whether you have an agent or an independent contract negotiator like me working for you, or you’re negotiating on your own behalf, the very first thing you need is to understand the essential terms of the publishing contract.

Grant of Rights (or Licence)

This is often at the top of the publishing contract and describes the rights you are granting or licensing to the publisher and for how long.

It could cover many types of rights, such as all the different types of book edition (hardback, paperback, ebook) as well as translated editions, audio, film, TV and all sorts of other rights. Or, it might be limited to one type of right – paperback only, say.

The rights may be limited to the English language only or include all languages.

The length of the licence may be for the full term of copyright (author’s life plus 70 years), or for a shorter, defined period such as 10 years.

The territory is the area in which the publisher may distribute and sell their editions of the book. The simplest version is that the publisher is granted all rights, in all languages, throughout the world.

Alternatively, the world may be chopped up into smaller territories, in which case a book might be sold in the UK and Commonwealth (excluding Canada) by one publisher, with rights granted to a US publisher to sell their edition in the US and Canada. Both these publishers will have exclusive access to their own territories (so the UK publisher may not sell their edition in Canada) and non-exclusive access to other areas of the world.

Be careful with this term – you can’t give exclusive access to Canada twice!

The advance is an ‘advance against royalties’ or a payment provided upfront based on the publisher’s sales expectations. While any advance that is offered is not contingent on selling even a single copy of the book (which means you don’t have to give the advance back if the book sells poorly) the author does not receive any royalties until the advance ‘earns out’, or when enough units have been sold that the author’s share covers the amount of the advance.

It’s important to note that the large advances you might read about in the newspaper are not common, and indeed, some publishers don’t offer an advance at all.

If the advance is quite small, it may be paid in total on signature of the contract. If larger, it may be split up into several instalments which are paid out on signature and on publication of each edition for which the publisher holds the right.

Manage your expectations – you may not be offered an advance, and a small advance is more a gesture of faith in the author and a nod to the traditional publication model than a real contribution to the author’s living expenses.

Each time a copy of the book is sold, the author earns a portion of the sale. Initially, these portions will go towards paying off the advance, but if the book ‘earns out’ the author will begin receiving royalties, at intervals specified in the terms of the publishing contract, often every six months.

The publishing contract may also include an escalator, in which at certain sales levels the royalty increases.

Royalties are also calculated in a couple of different ways. Traditionally, royalties were calculated on the recommended retail price of the book, so you would see 15% RRP in the royalty clause and could be sure that from each sale of a £10 book the author would receive £1.50.

The end of the Net Book Agreement made calculating on net receipts much safer, as among other things retailers such as supermarkets began to sell books as loss leaders and the publisher was not receiving anything like as much as they used to. It’s very common now to see all royalties in a publishing contract calculated on net receipts, which usually means RRP minus retailer discount. If the royalty is 15% NR on a £10 book, sold to the retailer at a 50% discount, the author receives 75p.

It may in some cases be possible to bump up the royalty level from that given in the standard contract, but if you are unrepresented, it’s tricky to know whether your request will be thought sensible or outrageous – this is the type of knowledge an agent or independent contract negotiator will have.

Subsidiary rights are secondary rights that the publisher may exploit themselves (if they have the infrastructure) or will licence to other entities. The proceeds are split between author and publisher and the percentage you see in the publishing contract is the author’s share.

Bigger publishers may be able to produce audiobook editions themselves, but they will still sell other rights to more suitable entities. Serial rights go to magazines and newspapers, TV rights to a production company, and so on.

Don’t give a publisher a kind of right they won’t be able or willing to exploit – if they haven’t sold foreign rights in the other books on their list, why should they have foreign rights in your book? ‘Just in case’ they gain the ability in the future is not a good enough reason.

The emergence of technologies like POD (print on demand) and ebooks means there’s no real danger of that happening anymore, and under the traditional definition a book could theoretically limp on selling a few copies a year indefinitely.

In a modern reversion clause, if the sales levels or revenue remain low enough for long enough, the book can be considered out of print and the author can ask for their rights back. They are then free to sell them to another publisher.

Am I ready to negotiate my contract now?

And here’s my standard warning: your friend or brother-in-law who is a tax lawyer or something in finance may do lots of negotiating and have very strong opinions about the changes to the contract they would demand – and they will be useless to you when negotiating in an industry they don’t know. When someone opinionated but ignorant sticks their oar in, they muddy the water and nobody gets anywhere.

This is one of the reasons getting an agent or contract negotiator to do the work may be the most sensible use of your resources, as they know what can be changed and how far they can push. Contract negotiation is one of the services I offer, so if you’re in the process of finalising a publishing contract now, get in touch.

Get me to negotiate your contract

This article was first posted on 8th November 2020, and has been updated.